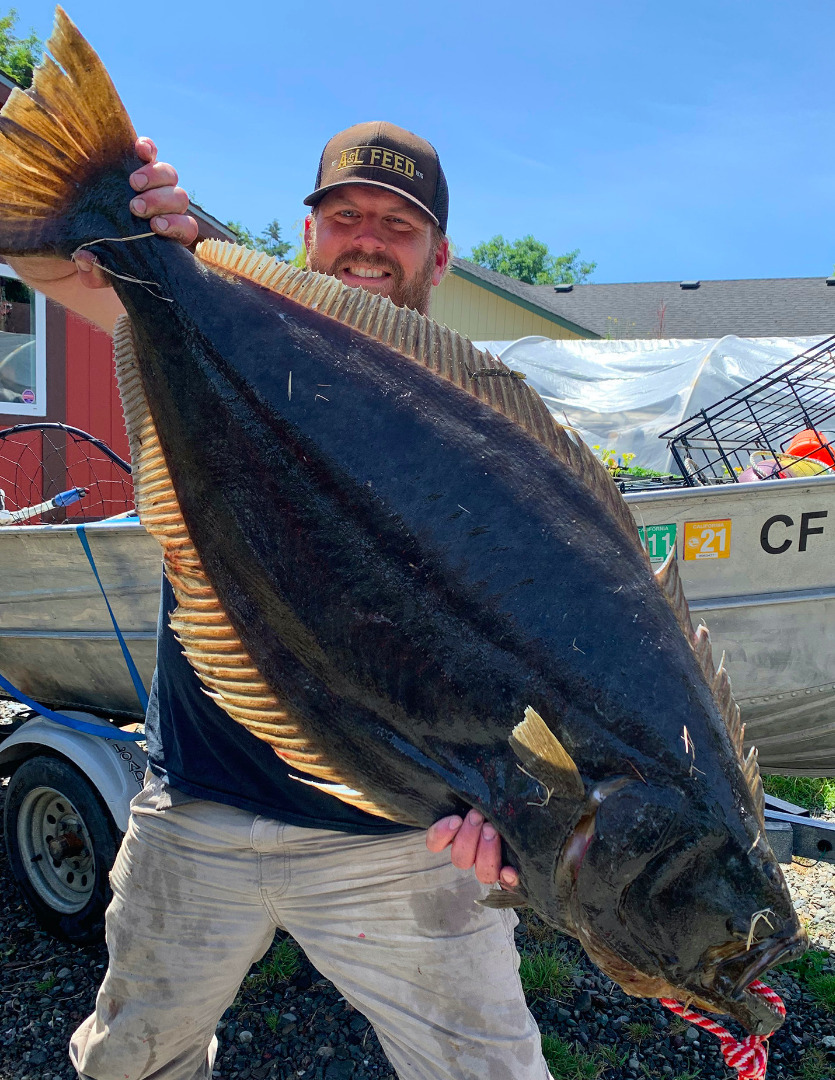 Halibut continues to be the shining light out of both Eureka and Trinidad as the sizzling bite continued into this week. It’s looking like the only thing that will slow it down is if you can’t get to the fishing grounds. And that’s exactly where we are. After a long stretch of good weather and even better fishing, the ocean lumped up, giving the Pacific halibut a breather. Over the weekend and earlier in the week, the charter fleet were reporting limits for six customers as early as 8:30, which is practically unheard of. With virtually no salmon to speak of, hopefully the halibut will still be on the chew once the seas come back down. The California halibut bite hasn’t been quite as hot, which can be attributed to the minus tides and big swings we’ve had this week. Humboldt Bay was packed over the weekend, and there were quite a few boats that reported three fish per angler limits. For a well-known salmon port like Eureka, the lack of salmon is a tough pill to swallow. But at least we have our halibut.

According to the CDFW website, Freshwater Lagoon has been planted with trout since mid-April. Reportedly, the fishing has been excellent this month for keeper-sized rainbows. Freshwater is open to fishing year-round and the limit is 5 trout per day and 10 in possession. For more information, visit www.nrm.dfg.ca.gov/FishPlants or call (530) 225-2146.

The Oceans:
Eureka
Eureka is still the place to be for all things Halibut. The only factor that can slow the bite appears to be the ocean conditions, and that’s what’s happening right now. “The Pacific halibut action over the last two weeks is the best I’ve ever seen,” said Tim Klassen of Reel Steel Sport Fishing “But now it looks like they’re going to get a break. We have some pretty rough conditions forecasted through the weekend. Earlier in the week the fishing was lights out, with just about all the boats catching their limit or close to it. The fish have been in the same general area, straight out and ranging from 250 to 320 feet of water. Most of the fish are still on the small side, but we are starting to see a few bigger ones being caught. Inside the bay, the California halibut bite has been fair, mostly due to the minus tides we’ve had this week. There seems to be plenty of fish around, but the big tide swings seem to have slowed the bite.”

Skipper Tony Sepulveda of Shellback Sport Fishing fished the Cape through Saturday and reports the lingcod bite was on fire. “Limits every day with more 20 pounders for the week than I could count and several over 30,” said Sepulveda. “The top fish was a 37 pounder.  The great weather started breaking down so I’ve moved the boat north to Trinidad.  We’re making a 20-mile run from there for limits of lingcod and colorful rockfish in an area that’s more protected from the wind than the lost coast. Pacific halibut have also been on the chew and we’ve been topping off our bottom fish limits with some shots at them. A 58-pounder was our best fish, but most are running 10 to 20 pounds.”

Trinidad
According to Curt Wilson of Wind Rose Charters, the weather hasn’t been great this week. He said, “We did a few halibut trips, and only caught a few. The fish are definitely still here, but it can be tough to get them in rough water. A lot of the smaller boats didn’t make it out this week. The rockfish bite is still going strong. Flat Iron and the Turtles are some of the better spots. We’ve been finding a better variety out deeper. A few keeper salmon were caught this week, but there isn’t much effort.”

Crescent City
A couple of boats came in on Tuesday with limits of salmon reports Britt Carson of Crescent City’s Englund Marine. He said, “The fish are really scattered, and there aren’t many boats trying. The fish that were caught on Tuesday came south of the South Reef. The rockfish and lingcod bite are still going strong, with anglers coming back with limits of both. There hasn’t been much effort on Pacific halibut, and I haven’t heard of any California’s caught this week.”

The salmon opener off of Brookings on Saturday was the best in several years, with more than 100 boats returning with salmon onboard reports Andy Martin of Brookings Fishing Charters. “Most had multiple fish,” said Martin. “The fish were shallow, feeding on schools of anchovies and herring close to the harbor. Fishing also was good Sunday and Monday, but slowed Tuesday, although several dozen kings were caught. Fishing was especially good considering the windy weather and choppy seas early this week. The Miss Brooke of Brookings Fishing Charters had two doubles and a triple on Saturday, with 12 adult kings from 10 to 20 pounds for six anglers.

Fishing for rockfish has been extremely good, with quick limits. Lots of fish have moved close to the harbor to feed on anchovies. Lingcod fishing is fair, with decent numbers of fish caught this past week. Rough weather has kept boats away from the halibut grounds.”

Salmon fishing remains slow on the Rogue Bay, but should improve with quickly warming water temperatures according to Martin. “The temperature at Agness increased from 61 degrees last week to 72 degrees on Tuesday. The warm water halts the upstream migration of salmon and forces them to hold in the bay, sparking the summer fishery in Gold Beach,” added Martin.